INCIDENTS OF THE TOUR


The members of Aberdeen football team were enthusiastically cheered by a large crowd of enthusiastic supporters on they alighted from the 10.15 Calodonian train at Aberdeen Joint Station last night on the conclusion of their first and what has proved (both from the playing and social points of view) a very successful tour of the Continent. All the players were loud in their praise of the hospitable treatment which had been extended to them, and they spoke highly of how appreciative the Continental crowds had been of their play. All the members of the party who returned last night wore, in the form of variously designed enamel badges, mementos of the matches in which they had participated, and these souvenirs, the players stated, they would cherish as relic of what had proved to them the most suspicious day in their careers. Several members of the party remained in London, and these will not return until later.

Mr Jaffrey, a director of the club, who accompanied the team, said that the Bohemian clubs were the pioneers of football on the Continent. They had very little to learn in the matter of attack and defence. In his own words, they “nothing to learn” in the matter of gentlemanly tactics of first-class football.
The president of the Slavis Club took the whole team for a cruise in his private yachat, and luncheon was served on board. On returning from a most enjoyable trip, they were entertained to a seven-course dinner, to which the “yachtsmen” did ample justice. Each member of the team was presented with a valuable memento by the president of the Bohemia Club. The goalkeeper at Pardubitz stood over six feet high, and was taller and cleverer than any goalkeeper he had seen in Scotland.

Arthur King, the popular goalkeeper, of whom, as a local product, the Aberdeen public is immensely proud, was bubbling over with enthusiasm regarding the tour. “Well,” said the stalwart custodian, “we found the play of some of our opponents of a higher calibre than what we expected it would be, for instance in our first match with Slavia Club. It was Johny Madden, the old Celtic idol, who beat us there. Madden is trainer of the Slavia Club, and in the movements of the players we detected much of the scientific game, which was only possible from the tuition of an old British player. To a great extent the Slavians depended on their robustness for their victory, but it is only fair to say that they were the most scientific combaination we had to face. “Madden” was in many of the movements, and I would say but that with some further tuition the Slavia Club would quite be in a position to challenge for supremacy the best of the British clubs.
“Of course we might have won that match-it was the only one we lost-but we were some-what taken by surprise with the determination of the opposition. One thing that impressed me, however, was that the crowd actually thought I intentionally tried to let through the goal that decided the issue of the match.
As a matter of fact, I did my best to save the shot. It was probably the most difficult I had to deal with in the whole tour, but I admit I could not have cleared it. Of course we didn't disabuse their minds on the point, and we found that our reputation was considerably enhanced as the result of this mis-conception.“I can never forget the tour,” concluded King, “and I consider myself honoured by being a member of the premier club of my native city at this time.

Angus M'Intosh, the inside right of the Pittodrie team, thought the standard of football on the Continent was equal to Northern League quality. The Prague team was the best, as the style was much better than that displayed by other teams encountered – in fact, it was equal to that of the Scottish Second League. The play on the Continent would improve in course of time.

The “Journal” correspondent with the team said-Our tour has now come to an end, and what impresses one most in the fine feelings that sport promotes between countries. We have visited and played in three countries-Bohemian, Moravia, and Poland-and the same good feelings exists in all.
There are differences in religion, politics, and national sentiments, but on the field of sport and in meeting in friendly combat all men were alike. The international athletic and football intercourse between Britain and countries of Europe are quite recent date, but, judging by the good it has already done, there is a great future in view. This ministers, the soldiers, and the statesmen of the world may do good as evil in their own sphere, but in sport it is all for good. Even the bitter national feeling which exists between the Germans and Bohemians is hushed at their Football Federation meetings, and to Britain they look for guidance in this question, which is a delicate one. They, however, trust in the fair-mindedness of Britain in dealing with matters of sport. 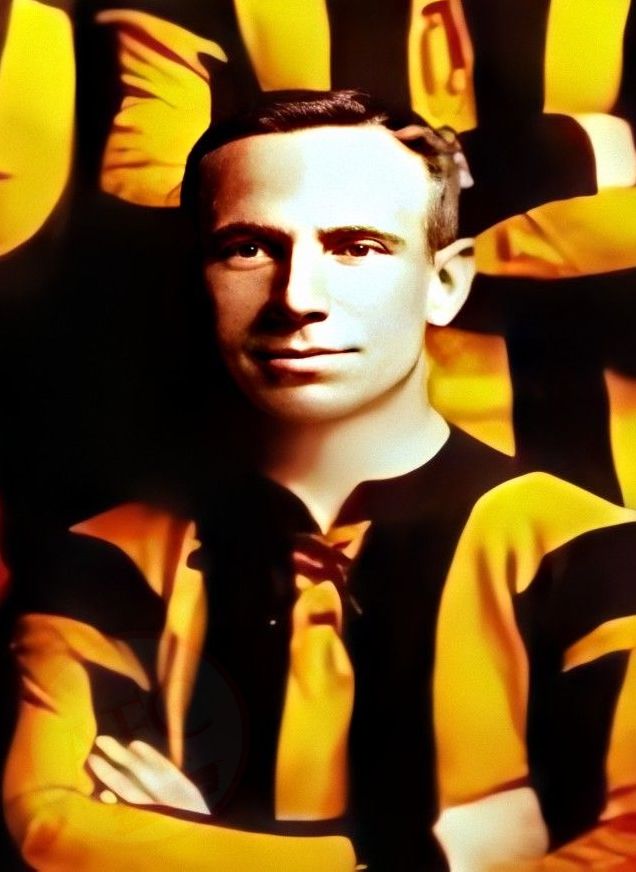 Football Player, Captain, No 2 Right Back